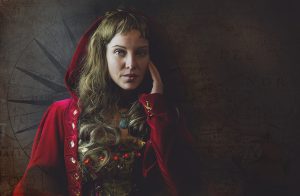 This post was an extremely difficult one to write as there are so many great costumes out there to be amazed by.  I tried to come up with a top ten favorite costumes, but I found that whole films typically had several examples of brilliant threads as the costume designer wielded their magic everywhere.   Therefore, I came up with using films as a topic to include the costume(s) featured.

Almost every genre is represented from horror, to sci-fi, to drama with historic value, to action adventure in comic book superheroes and fantasy.  You’ll find I favor the fantasy more times than once with the imaginative styles shown.

Makeup has always inspired me the most, but with the huge respect I have for costumes (which sometimes completes a makeup) I almost wish I went the direction of costume design instead.  An actor almost always confesses that once in costume their performance is enhanced exponentially and the finished look makes for great entertainment and escape.

So let’s begin with my top ten list starting with: 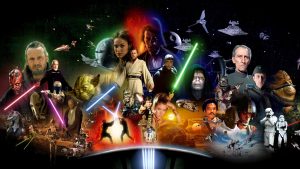 Star Wars has always been near and dear to me since my childhood and some of the best examples of sci-fi fantasy imagination in costumes are prevalent in each film.  I absolutely love the stormtrooper and clonetrooper armor and Darth Vader scared me enough as a kid that his look is an emotional favorite.  I love the simplicity of the Jedi outfit as it looks incredibly comfortable–which can be an advantage in lightsaber duels.  I plan on making a Commander Cody Clone Trooper armor for myself as I already have for Mystique’s World of Cosplay.

#9 Disney’s Pirates of the Caribbean 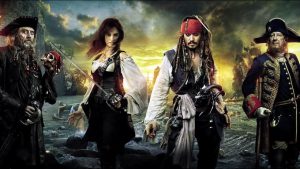 A shout out to costume designer Penny Rose for “nailing” the classic pirate look down beautifully for all of Disney’s Pirates of the Caribbean movies.  Incredible detail and on point historical accuracy with a flair of originality I’m sure is one of the successful attributes to continuing the saga with five full motion pictures and a short film prequal to the first one Pirates of the Caribbean: Curse of the Black Pearl.  I have always been fascinated with the period of history that surrounded the time of these types of pirates and I even have a sunken treasure theme in one area of my household.  I can only imagine how much fun it would be to play dress-up and act like a pirate as Johnny Depp so brilliantly portrayed as Captain Jack Sparrow. 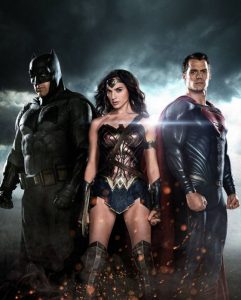 Just in time as I began getting into cosplay again, after a long hiatus, these wonderful new designs came out of the classic DC characters all in one movie.  Thank you Zack Snyder (director) and Michael Wilkinson (costume designer) for an absolute brilliant collaboration.  These costumes are fantastic and I want them all!  I am so happy that the appearance of underwear over a body suit is gone as shown with the classic comics.  The metallic undertone for The Man of Steel with the Kryptonian script on his suit is perfect.  The serious buff/strong look to Batman is just what “the doctor ordered” to incredibly enhance his intimidation factor.  Wonder Woman’s outfit is terrific with the added armor look with a sleek design for comfort in battle ready offense.  So I’ve done The Man of Steel already in cosplay where I wish I opted for a muscle suit, but when I go to do Batman’s from this film I most certainly will pull all the stops to be as screen accurate as possible.  When browsing through the many examples of these DC characters through other cosplayers, these are the three most popular looks copied–so I’m not alone in loving these designs. 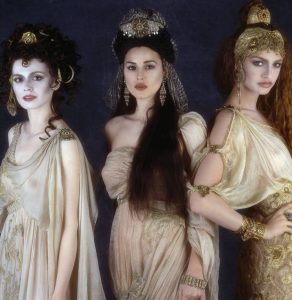 These beauties are making another appearance in a top ten favorites as they were included as a favorite makeup of mine.  This whole film was chalked full of wonderful costumes from Dracula’s garb in his castle to his morphed young appearance on the streets of late 19th century London and including all the other historic industrial aged wear from the other cast of characters.  Eiko Ishioka was the genius behind designs.  In fact she won an Oscar for her work on this film.  The makeup and costumes complimented each other flawlessly. 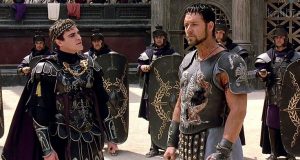 More historic armor and wear and another repeat film in a top ten as Gladiator is my number 2 favorite film.  This film takes you into the past as you believe you’re watching a true battle scene as in the opening action sequence in war and to each arena fight with the gladiators.  Set design and costumes compliment each other flawlessly for an accurate portrayal of the Roman empire.  Janty Yates was the master behind this films costumes and also won an Oscar for Best Costume on this film in 2000. 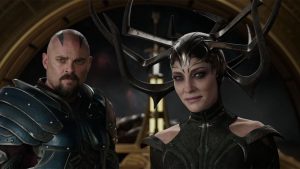 Marvel Villains are in play for best costuming. Karl Urban and Cate Blanchett as Skurge and Hela in Thor Ragnarok (2017)

Back to the comics as the villians from Marvel’s Thor: Ragnarok (2017) takes all the attention for some awe inspiring outfits. This whole film was incredibly entertaining with the humor, story, multiple worlds and tons of “eye candy” which several of the costumes helped catapult this movie to number 5.  WETA Workshop‘s 3D, costumes, and props department collaborated with the film’s costume designer Mayes C. Rubeo for some of the best looks for the film like Thor’s and Hulk’s helmets in the arena, Grandmaster guards and my favorite Skurge’s armor.  I’m currently working on patterns right now for my own Skurge cosplay.  I haven’t seen many attempts at him which provides me with more motivation to complete it.  Hela’s attire is fabulous and I’ll be recruiting my wife to be side by side with me as The Goddess of Death with my Skurge. 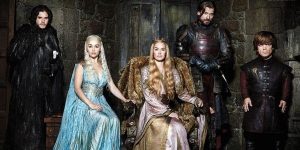 Okay, so this isn’t exactly a movie, but I had to include HBO’s Game of Thrones series because it most certainly is a superior quality and highly professional filming project that has all the qualifications to include it in my list.  The costumes for this series are fantastic and full of originality, variation with seven different kingdoms to incorporate, and precision.  A definite shout out goes to the costume designers Michele Clapton (65 episodes) and April Ferry (8 episodes) for their brilliant fashion sense.  The mood, scenes, and plot twists are set beautifully with the colors, styles and purposeful outfitting which takes the viewer everywhere the cast goes throughout their adventures. I can’t go on without giving credit to the creator and author to these stories from the highly successful series of books George R. R. Martin has published.  All the inspiration, storylines, characters and worlds started there which he also continued writing for the show on HBO as well.  I have scene some terrific examples of Cosplayers sharing their favorite characters with their costumes they’ve made themselves which were inspired by the many looks from Game of Thrones. 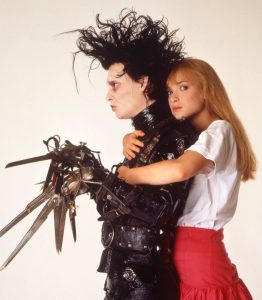 Director Tim Burton almost always, in my opinion, “hits it out of the park” with special effects including purposeful costuming.  His movies always seem to incorporate a dark side with a soft touch and a mix of humor whereas Edward Scissorhands is no exception.  The focus as a costume here is obviously Edward but I really liked the 50’s style theme with the suburban neighborhood setting that contrasted each other giving the plot excellent attraction.  Costume designer Colleen Atwood and makeup FX artist Stan Winston gave us visual characters that are still popular today after 30 years.  The concept of Scissorhands is strange enough and coming up with the rest of the outfit for Johnny Depp‘s artificial person invented by the classic horror King Vincent Price became a masterpiece, indeed.

#2 Lord of the Rings Trilogy

LOTR Elves as an awesome example of Imaginative and Beautiful costuming

Every now and then a film comes by inventing and defining new ways to do things with special effects and technology and The LOTR came and changed it all for the better!  Peter Jackson brought the perfect representation of J.R.R. Tolkien’s novels to us what many film studios, including Disney thought about doing for many years.  2001-2004 was the time for all these films (Fellowship, Two Towers and Return of the King) and they are still the best fantasy films ever made.  Oscar winners Ngila Dickson and Richard Taylor are the costume designers responsible for the joyous apparel we see the characters in.  Richard Taylor’s main contribution were the armor and armory designs and he is the head of Weta Workshop with his wife and crew whom fabricated everything from scratch as it was in the middle ages.  Every single costume from these films from the hobbits to the elves to even the orcs are fabulous.  The challenge, like Game of Thrones, was to come up with many different outfits for many different regions and people/class types including creatures and armor as well.  This was a bit more difficult as the author of these novels is no longer with us whereas GOT’s author was involved with its filming.  I’ve watched these movies again and again and could never get tired of seeing them as I see something different and exciting  every time I watch them.

#1 The Chronicles of Narnia: The Lion Witch and the Wardrobe 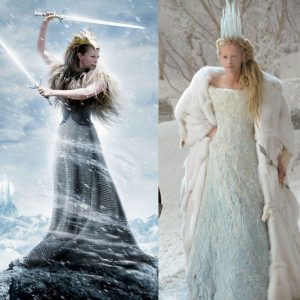 Tilda Swinton is lucky to wear the best as The White Witch in The Chronicles of Narnia: The Lion the Witch and the Wardrobe (2005)

And the number one favorite film for best costumes goes to…you guessed it…another fantasy genre film, Disney’s The Chronicles of Narnia: The Lion the Witch and the Wardrobe.  I was so excited when I heard there was going to be a live action version of this novel series by acclaimed Writer, philosopher C.S. Lewis.  With the success of The Lord of the Rings a couple years earlier from a different studio, this motivated Disney to catapult the Narnia books to film.   I remember as a child watching this story in cartoon version on television every year with excitement so imagine my delight (almost like having a “Turkish delight” –Narnia fans will get it–lol) when I was told they’re making a movie for each novel.   Costume designer Isis Mussenden soared to amazing heights bringing the characters to life with their attire on screen, especially the White Witch played by Tilda Swinton.  With the help of the author’s description she pulled out an incredible design for the witch that I know for sure can immediately be said is my favorite costume(s).  Swinton’s acting performance sold the audience she belonged in that role and I’m sure she’d credit the outfits to help her achieve the witch’s persona perfectly.  I’ll never forget the impression I had when she showed up the first time in the movie when the witch came across Edmond in the snowy forest on her sled and deceived him with the candy.  Equally as stunning as her Ice crown and white gown was her battle fatigue when she commanded the war against the Lion and children where she rode up on another sled pulled by polar bears.  If you haven’t seen this film series, at least this first one, I highly recommend it and if not at least google the images of The White Witch from the movie, a total feast for the eyes!

So there it is, another list of top ten favorites of mine.  Thanks for checking it out and feel free to comment what some of your favorite costumes from what films you like the most.

2 thoughts on “My Top Ten Favorite Films for Best Costumes”