Thought I’d mix things up a bit and do a little autobiography on myself to add to the list–just a bit arrogant to throw me in with some really terrific cosplayers that I’m nowhere near the likes of, but nonetheless just as excited about the craft.  It’s also a tribute to them as I will be listing some of the traits and tricks I’ve learned from them all as I went about executing a few of the cosplays I’ve undertaken. 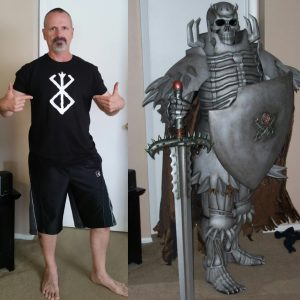 In and out of cosplay; Skull Knight from Berserk manga

If you’ve read the About Me page found here on the website you may already know a little about me and what I’ve done over the years that contributed to my artistry.  The whole idea behind this blog was to showcase all I’ve done and what I will do from day to day as a virtual portfolio.  This portfolio goes back as far as 24 years ago when I first moved to Florida to study makeup in film and television.  My passion for Sci-Fi, fantasy and horror at the time was enough of a driving force to take me out of my roots in Ohio and start all over again in central Florida alone with my two cats to pursue a career in SPFX.  I went to a makeup school that pumped out 15-20 aspiring dreamers, like me, every ten weeks and flooded the market, so the job prospects straight out of makeup school weren’t as promising.  I was grateful for much of the skills learned there, however, and learned about a new field that required my eye for three dimensional art and that was for the entertainment industry making props, sets, and life size statues for the theme parks abundant here in Orlando.  That industry is known as scenic art and is always in demand around here.

The Natural Path of a Cosmaker

The journey that led me to becoming a Cosplayer was my work doing armor, props, helmets and weapons for other people who wanted help from me or just needed and paid me to build everything for them when they learned about me as my reputation grew.  I was making full scale helmets out of my garage and selling them online and advertising for them on popular prop and costume forums like therpf, and the Battlestar Galactica fan forum thetcf.  I met several new friends here and when I was introduced to DragonCon and met up with fellow fleeters the seed was planted for me to start donning costumes that I helped create and build.

My methods are unconventional by todays standards and I’m constantly learning the new ways cosplayers now are putting together some impressive, light, quicker, and less expensive fabrications.  My methods tended to be more expensive, and incredibly time consuming like the way a production company would put together a costume for a movie.  I would sculpt the initial concept out of clay, then make a mold, then cast out of fiberglass or resin and then finish with paint and detailing.  To get an idea of my methods, just look here in the gallery of photos below:

The Man of Steel Cosplay 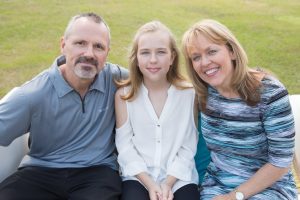 The number one blessing in my life is my family.

The thing I do the most when not working on this website and producing a new cosplay is spending time with my family.  I’m so blessed to have a terrific wife and daughter who supports this crazy hobby and I even managed to get them in some threads, too, as you’ve seen above.

We go to church on Sundays as God is vital to our life, in fact that is where I met my bride and got married at the same church we met and still attend to today.

As I’m getting older I look back at a lot of things I’ve enjoyed and taken on through the years.  I’ve loved fishing since a boy and was thrilled when I moved to Florida as it is one of the fishing capitals of the world, both fresh water and salt water angling.  I also happen to live off of a small lake, too…jackpot!

My job, of course, is a main occupier of my time as I work at a sign shop– Vital Signs of Orlando, inc since 2015.  A repeated question I ask my featured cosplayers is what they…”do for a living and do you use any of the practices at work which would help with your cosplays…?”  I can tell you that much of what I do as a fabricator there does help me a lot and I get to apply these traits and tools to building cosplays.

Movies are an essential form entertainment for me and you can see top ten lists here on my blog of my favorite movies, movie props and my favorite makeups in film.  Much of my motivation and reference comes from the films when I take on a particular cool character I’m impressed with.

Ready or not, Here I Come! 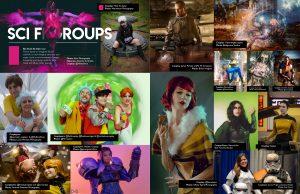 I’ve been seriously cosplaying only recently, but since this is my blog, I will be continually adding galleries above of new cosplays I take on.  I’m guaranteed doing for myself at least three a year because that is what I’m averaging with my interviews.  As you may know I’ve incorporated shared photo shoots with the Cosplayer to be published next in the Featured Cosplayer section here.

With just the short period of time putting myself out there I was able to submit and be published in two issues of Cosplay Realm Magazine.  My Battlestar Galactica Viper Pilot made the September 2018 Sci Fi issue scene above and my “in and out of cosplay” Man of Steel by Brilan Imagery was in the December 2018 open entry issue. 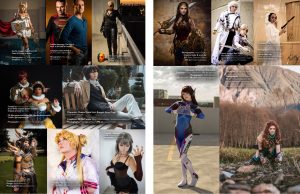 My steampunk cosplay, specifically the steampunk gauntlet I made and wore got the attention of a premier photographer Wanderings in Wonderland.  She asked to borrow the gauntlet and I even added some large gears for the set, as well, for her visionary shoot with an old west, steampunk mashup.  I was so honored to have been a minor part of this terrific project!

The Effects in FX

In staying with the tradition of a Cosplayer interview I’ll keep answering some of the same questions I like to ask my other artists.  Like, “Where did you get your title or alias?”  Mine is not too catchy as a cosplay related name, but is the name I chose to call my website and brand I’m trying to create.  JP’s FX Creations encompasses the entire body of work and targeted description of a past and ambitious future in media projects.

You’ll also notice I have a section devoted to my Holiday (Christmas and Halloween) decorating passion, which maybe should eventually have a separate blog altogether.  At least maybe Christmas could find a home elsewhere as Halloween at least falls in the lines of “dress up,” effects and props in yard decorating.

Referring back to my methods as an old-school FX fabricator, I feel I really need to learn more of the modern and popular technique of using more EVA foam for my builds as they will be lighter, more comfortable, less expensive and less time consuming to make.  Especially if I go to take on my dream cosplay and that is Karl Urban‘s Skurge from Thor: Ragnarok. The moment I started getting into cosplay, I wanted to take this one on, but haven’t made the plunge yet until I feel up to par or at least a detailed plan of action.  Soon…soon I promise to make this will happen.

That’s all I pretty much want to say about myself for now, but I’d like you to read “My Top Ten Reasons I Love Cosplay” here and get a fun and interesting look into my passion for the hobby.