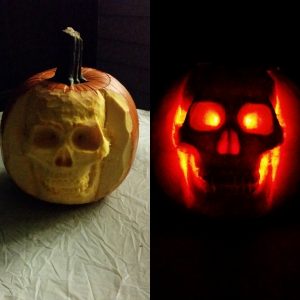 Pumpkin carving is easily the most popular or most practiced tradition for Halloween in my opinion.  At least it is for my family and throughout my lifetime.  The aroma of the fresh pumpkin after cutting into one and pulling out the pulp and seeds always brings me back to exciting memories of Fall and Halloween growing up.  My mother would wash and bake the seeds to be snacked on while we carved our classic jack-o-lantern designs, to then be placed outside on our front porch for the spooky season.  I grew up in northern Ohio so the cool weather allowed for early October decoration with the pumpkin art to last all month.  Now that I live in Florida, carving a pumpkin has to happen nearest to the October 31st date to ensure that the pumpkin will not rot in the heat.  They also need to be kept inside the air conditioning until just before Trick or Treating happens and then the jack-0-lanterns can come out to greet the eager candy hunters.

The Progression of My Pumpkin Designs

I’ve only just recently documented the last several years of my pumpkin carving, but I felt there is just enough to fill a post here for the Halloween Traditions page.

As much fun as I have doing them and as important as I felt the design would be, I would begin researching ideas starting in August.  Some of the designs ended up being what my daughter wanted it to be as a little girl.

So here is a gallery collection of past Jack-O-Lanterns for Halloween:

I was always impressed with the 3D pumpkin carvings/sculptures and since I’ve done many clay and foam sculptures in the past, it was only natural that I would attempt one of my own.  So this year I was ambitious enough to try my first 3D pumpkin carving for Halloween.  I chose the classic skull design and thought it would be neat to make a time lapse video of the progression.  My daughter had fun editing the video with spooky music and the 70’s style film filter. (see video below)

First here is a picture gallery of the steps taken to achieve the skull coming out of the pumpkin: