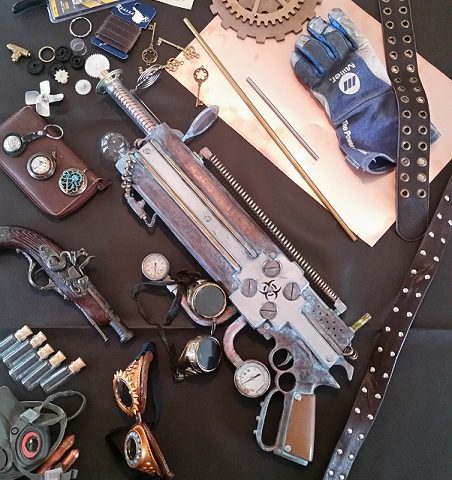 I absolutely love anything steampunk.  I once saw the perfect, quick, definition for steampunk as …a time that never was, but one that we wish we had…

The actual definition from Wikipedia is [Steampunk is a subgenre of science fiction or science fantasy that incorporates technology and aesthetic designs inspired by 19th-century industrial steam-powered machinery. Although its literary origins are sometimes associated with the cyberpunk genre, steampunk works are often set in an alternative history of the 19th century’s British Victorian era or American “Wild West”, in a future during which steam power has maintained mainstream usage, or in a fantasy world that similarly employs steam power.]

What’s great about steampunk is that your imagination is the only thing limiting you on what you can do for any deco or cosplay accessories relating to this popular genre.  This means endless combinations and countess leather, goggles, gears, brass, copper, fashion and made up time travel device add ons to any project. Fun stuff!

I remember my exact first encounter where I fell in love with the theme and that was at DragonCon 2011 after the realease of the movie Sucker Punch.  I’m sure steampunk has been around since the real industrial revolution, but this movie seamed to unlock the fan base to explode in exposure.  I was at DragonCon 2010 the year before and I can’t think of any instances of steampunk that I could remember.  2011, however, every time I turned around I could easily spot brass and leather immediately.

So in honor of my love for steampunk, I’m dedicating this post to the three costumes I’m designing and making for me, my wife and daughter for MegaCon Orlando 2018.  Here I will be walking you through the design, fabrication and test fitting for our group Cosplay.

So, to start, I have to disclose the absolute driving force to this project besides my love for it, and that is the budget.  I’m trying (for once…ha, ha) to make everything as frugal and cost efficient as possible.  Which means I’ll be making almost everything from scratch and repurposing stuff that I may already have.

Our group cosplay is going to tell a story…I am a steampunk airship mechanic, my wife is just steampunk “bad to the bone,” and my daughter is a life sized windup doll we made because the narrative we’re pushing for is that we can’t have kids of our own.

I always like to start any cosplay with the props that will be used because I believe that is my specialty and is what I have the most control over.  If the prop making goes well then my confidence gets boosted and the rest of the costume making should be successful.  Earlier I wrote a post on prop weapons where I talk about how usually this is where I start a project, so naturally this is where we’ll begin.

As I mentioned earlier, budget comes into play as a dominate motivation and I just happen to have a prop gun that I can repurpose for me and a prop gun, perfect for my wife to use.  The only cost is with little accessories, paint, rub-n-buff, and materials to make a holster for Debbie’s flintlock gun. 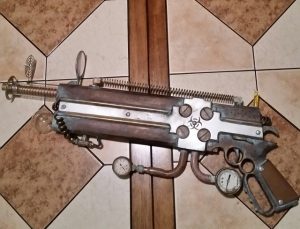 Finished steampunk gun from repurposed prop weapon of two other themes I made from before.

I’ve seen many cool steampunk guns during my researching stages of this cosplay and a lot of them were nerf guns painted to look the part.  I was impressed enough that I had planned on doing the same until I realized I could just take what I already have and modify it.  This gun started as an anime prop I made and molded from the mini series Gungrave. Then I turned it into a Zombie Apocalypse prop gun, and then to what it is now.  See the transformation below. The parts added to make it steampunk I found at a local surplus store called Skycraft where you can get just about anything dealing with electronics, motors, wiring, hardware, LED lighting, etc… I chose mostly small parts that made it cost efficient, especially when I started off with a free gun that I already had.  I used a product called Rub-N-Buff to color the gun the proper metallic steampunk look.  Rub-N-Buff is not a paint, but a metallic wax that you apply with your finger or brush and rub it in and buff to give it the metallic sheen.  You can make just about anything look steampunk with Rub-N-Buff.  The only new paint on the gun is the patina aging effect I gave it to simulate a realistic weathering effect to copper and/or brass.  This is taking a chance because the countless pictures witnessed during referencing, I saw absolutely no aging.  They were all brand new clean looking repainted nerf guns–which was actually still impressive, but I chose the aged look. 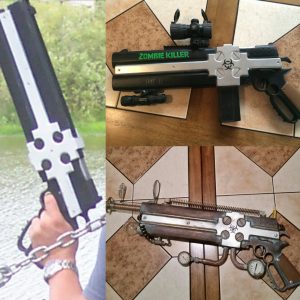 Prop gun transformation from Gungrave to Zombie Apocalypse to Steampunk

Turning an existing prop gun into a steampunk gun:

I’ll begin here by emphasizing budget again.  I already had a flintlock replica gun in my collection that could be used for Debbie’s accessories.  All that was needed was a way for her to carry it without carrying it in her hand the whole time and that is making a holster.  All I used was faux leather material from Joann’s, 5/8″ push snaps, grommets, and some real leather strapping.  See pics below.

Back to my costume…one of my favorite steampunk accessory invention is the gauntlet. It’s a perfect add on to my cosplay because of my mechanic status.  The gauntlet for my character gives him the ability to protect his hand from hot steam pipes, and offers the added strength as a gauntlet represents more power and strength for the hand that it houses.  See pics and video below on how I made mine on a budget.

I have the great fortune of working at a sign shop, Vital Signs of Orlando Inc, that has a computerized cutting table (CNC router) that can cut almost any shape out of almost any material real fast once it’s programmed in the computer.  I of course asked permission and used scrap material that was going to be thrown away.  I also was making something for myself and not anything I could potentially make money off of.

The few props highlighted here that are cut from this tool are my pipe wrench and Cassidy’s windup key mechanism with gears on her back, for her doll cosplay.  The material used was plastic board called sintra that keeps the props light weight for comfort and easy function.

Pipe Wrench-I knew as an airship mechanic I had to have some sort of tool on me and what better tool for steampunk is an oversized pipe wrench.  Nothing beats the real thing except, if you don’t have one and the real thing would be WAY too heavy!  So I made my own out of sintra and cut it at work using the CNC router table.

Windup Key Mechanism-Nothing says life sized doll better than a giant windup key protruding off the back of the subject.  To make the key at least turn manually I used the inner bearings out of a fidget spinner.

Here’s a quick video of the CNC router table in action cutting out the windup key: 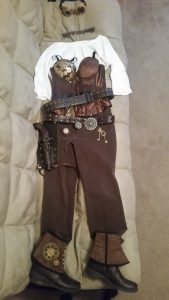 Here again, I’ll refer to the budget and tell you that what a nice surprise to find my wife happened to have some threads like the undershirt and brown jeans along with boots that could be used perfectly to go with her steampunk girl cosplay.  Instant savings.

I freely confess that there are store bought items, but a major plus is that her goggles and corset were bought from a store closing sale at a Party City where  75%-90%  off everything in the store.

Other new, but reasonable priced items for her were the spats, pocket watches, and skeleton keys (0.50 cents ea).  I did buy some lace material at Joann’s and made her choker and bracelets. 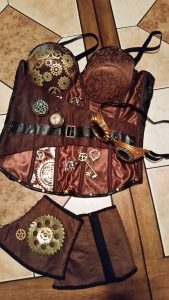 The only store bought items for the steampunk girl costume

Enough of the teaser photos, here’s the first test fitting of my cosplay.  I started to cheat a little with the budget and had to get a couple of things of mine on Amazon.  Time was running out and I couldn’t find my shirt, or suspenders at any local thrift store. I also bought my spats as well. 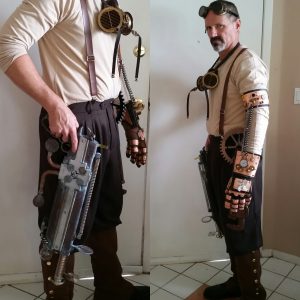 My original intent was to take these three cosplays to my local comic book convention, MegaCon Orlando, with my family and show them off there.  I had successfully finished the costumes and had tickets for all of us to go on Saturday of the con’s long weekend schedule.  But life sometimes throws you “curveballs” and forces a different direction with plans.  We had a friend of the family pass away suddenly and we wanted to attend the memorial service that was happening the same day.  Some things in life are more important and I didn’t hesitate to support our friends in mourning.

We’ll always have the costumes and I knew I was also going to take many good photos specifically for this blog.