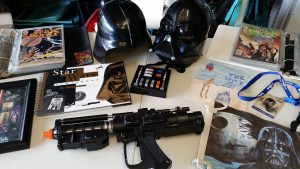 Star Wars is KING!  Okay, so I know I’ve upset half the readers already.  I don’t necessarily believe that.  I’m a Battlestar Galactica guy as you can see from my previous blog posts.  However, I want to introduce you to a good friend of mine, Tim,  who believes Star Wars rules and after hearing him and the way he talks about theories, news, and obscure facts, I get excited and almost jump on the Star Wars train myself.

This is a blog post about, as the title says, the making of a “die hard” Star Wars fan. You’ll read and experience how he became a fan and how long his passion has been constant, maybe even grown with the excitement of the many installments and how vast the Star Wars Universe has grown as well.  I have hand picked much of the merchandise and collectibles shown in the images here, which is only about half of what he owns and shares with his boys.  I know there are a lot of serious collectors out there that may not be to impressed with what is shown here, but Tim is the kind of collector that doesn’t keep things on display in it’s original packaging anymore (he used to), but each piece in his collection has a specific memory and even a story that he connects to his life somehow.

So how big of a fan is he really?…you might ask.  Well, he never misses every Thursday nights installments of The Jedi Council on YouTube.  At his wedding he had the groomsmen march up the aisle first to the opening epilogue theme music right after In a galaxy far, far away…  He named his youngest Luke, and those who know him may debate if Luke is the biblical name, since he’s a man of faith, or the Star Wars Luke because of his zeal of the subject.  I’m gonna play it safe and say it’s a little bit of both.  He organized for me and several of our friends pre-sale tickets to the first showing of the last three films which was a day before their official release dates.  Now me, being a regular Con goer, just knew I had to make sure he would get the experience of a Star Wars Celebration adventure which was an experience he will never forget and also a new tradition he will never miss.  I know he can’t wait to take his boys with him next time. For one of his boys 5th birthday party he had an authentic life size working R2-D2 from the R2 builders Club rolling around the party with a 501st imperial officer and a non 501st, but well made, Sandtrooper cosplayer hanging out too. 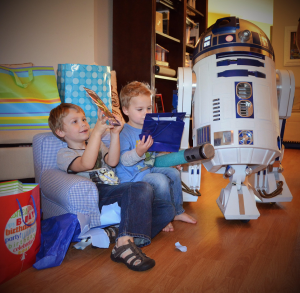 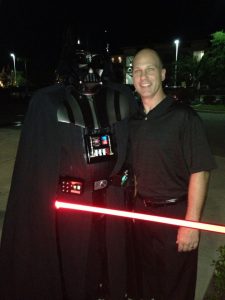 Is that red eye or light saber reflection in Tim’s eyes?

So how did it all get started?   In Tim’s words…”I became a fan when my dad took me and my brother to see ESB at the theatre as a young kid when it first came out.  At some point after that I watched ANH on television with commercials and then the regular format.  They re-released ESB to get us pumped up for “Revenge” of the Jedi later to be called Return of the Jedi.  So I went back to watch ep.5 again in the theater and then ROTJ.  I’ve watched these so many times I have lost count.  I’ve watched all six first episodes back to back all the way through in one day.  I’ve also watched all six all the way through with the commentary.  I kept going back to the theatres to see the digital re-mastered and new scenes for  4,5, and 6 right before they released the prequel trilogy (which ep 1,2, and 3 I didn’t enjoy as much).  3D was a must see for me also not long before Disney bought Lucasfilm.  Since ROTJ I’ve gone to all the films’ opening nights.  I’ve seen all of The Clone Wars cartoon and Rebels animation thus far.  I’m giddy with great anticipation for Solo: A Star Wars Story and ep.9.”

You can get a feel for Tim’s passion and a little more history of the foundation and connection he has to Star Wars in this video we shot together as I went through and picked out some of the non conventional merchandise not usually seen or talked about with other fans I’ve come across.

If you watched the video in it’s entirety you would have heard some of the questions I asked him like, …”Out of all the things in your collection, what would be your favorite?”  He surprised me with something that is new in his collection that his boys wrapped up for him for Christmas last year.  It was the sun shade for his car that features the cockpit scene in Episode IV with Han, Chewie, Luke and Obi wan. (…”that’s no moon…”).  He told an emotional story about losing his dad recently and seeing one of the exact same sun shades on the day his father passed and before he received his. Not telling anyone he liked it or even saw it–made it an amazing  coincidence, or some might say a sign, when he opened his on Christmas morning two days later. 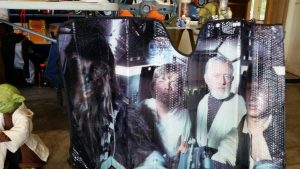 If I were to pick any favorite pieces from his collection after seeing and hearing about all of it I would have to say any of the toys that made sounds like the At-At, Millennium Falcoln, or Blasters.  Those sound effects and recorded dialogues took me immediately back to when I was a kid growing up and  the memories I had enjoying countless hours playing with these same toys and watching the movies.  Mine is the classic story of losing all my toys because my mom sold them at yard sale without my consent.

I found a fun questionnaire on Tumblr @thedisneyunderword that I’ve asked Tim to fill out for me and you can have fun coming up with your own answers as well.

Okay, I believe Tim is being humble or modest with that last question…I would rank him an 8 or 9 easy with the knowledge of the Star Wars Universe.  My knowledge is a dismal 5, which means I get the thrill of learning about this incredible story line.  So get ready Tim for a lot of questions from me.

I had a lot of fun working on this post with him and seen that he enjoyed it as well.  This will probably be an ever changing and growing post and topic because Tim already wants to introduce me to another fan and acquaintance of his that has an impressive display.  He’s already sent me some teaser pics so check back here often with updates.  Until then, May The Force Be With You! 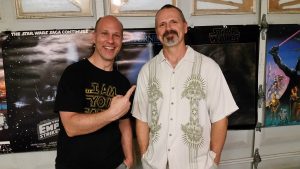 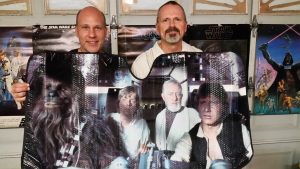 Tim and I with his favorite piece in his collection…Sun shade ep. 4