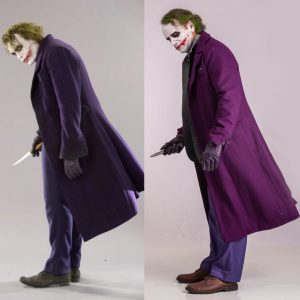 Joker Cosplay side by side comparison

Heath Ledger, in my opinion and I believe a majority of Comic lovers, was the best Joker performance on screen.  He created an original and very challenging and believable villain for Batman to pursue.  I could spend all my time here defending my position, but I’ll relegate that to it’s own blog post in the future, but for now I get the opportunity to tell you how I became this iconic character as a Cosplayer. 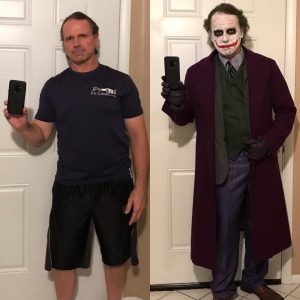 The moment I wanted to be Heath Ledger’s Joker was after seeing someone else do a perfect impression including his likeness which rekindled the passion I had for the Joker in The Dark Knight.  That Cosplayer is Jesse Oliva alias @agentsofchaos.  Then even before I ordered a single “thread” or bought any materials, supplies or makeup I began studying and memorizing Heath’s performance from the film. This became a very exciting cosplay to do because there were multiple versions of him I could do from the movie including the bank heist, suit and overcoat, interrogation, and nurse version.  There is even a non makeup version where he is dressed up in ceremonial police uniform.  I’ll be discussing three of these for now and updating this post as I finish the others.

Another exciting aspect to this cosplay was that I got to bring back my makeup skills that were required for his face makeup and scars on both sides of his mouth.  My love for makeup was what started it all and brought me to the place I am today.

Now that I was confident enough to be in character and believe I could pull off a convincing Joker I was already in the move to find a good quality main outfit for The Dark Knight Joker and this would come from Pro Cosplay.  Here was an almost complete suit and purple overcoat rendition from the bulk of the film. I received:

All I needed were the socks and shoes.  I was excited to find some shoes that were the same style, just off a little in the color at a thrift store for only $3.00.  The argyle socks were a specific find acquired from Amazon here.

“You Wanna Know How I Got These Scars?” 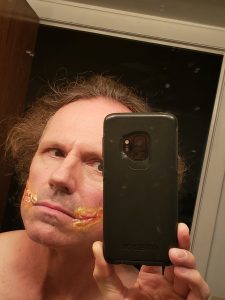 The makeup portion of this cosplay was the challenging yet exciting step because makeup is where it all started and I was about to get to show off my skills after a long dormant absence since my last makeup job.

First off, here’s a list of supplies I needed to pull of a successful Joker with his signature scars.

The weakest and most upsetting thing about this cosplay is my hair.  Another reason I took so long to reveal this project was I was trying to grow my hair out to hopefully bring it to a better comparison to Heath’s.  It could’ve worked out better if I didn’t have “sheep wool” for hair…lol.  I have naturally curly, thick hair that frizzes easily so even though my hair had enough time to grow what I needed, it decided to go out instead of down so a little hair styling had to be done.

The green that was added to my hair to complete the iconic Joker look came from a temporary, washable spray hair color here.

When I go to do the nurse outfit I’ll be purchasing a red wig for the Joker’s disguise confronting Harvey Dent as the beginnings of Two Face. 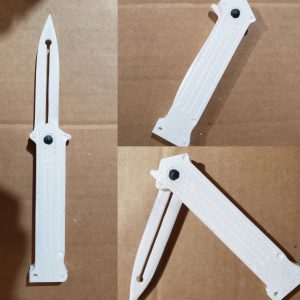 The Joker in The Dark Knight is shown multiple times with his favorite form of killing tool which was the knife.  And naturally I had to have it, but at a convention I couldn’t have a real one so I had my friend Damaris (Mystique’s World of Cosplay) print me the specific one from her 3D printer.  It looked so real and was still considered dangerous that it was confiscated at Spooky Empire 2019 in Tampa.  I’m glad I already had a lot of pictures taken with it, so I understand and complied without a hassle.

The handgun you see with the bank heist outfit is an actual real Glock 23 (.40 cal) of my own and to make it look as if it’s automatic with extra capacity magazine, like the film, I just pulled the 13 round mag I have and held it out more giving the appearance of extra length.  See pics below.

I bought a set of just “joker” playing cards with one of the four different cards being an actual design from the film.  I ended up making several of them up as business cards and handed them out at conventions by just taping my logo and information on the back of each card.

Another fun prop I used was a pair of “breakaway” keyless trick handcuffs.  This was an essential add-on to the interrogation version of the Joker at Gotham Police Dept. MCU as a prisoner.  This was my favorite version by far because I got to get even sloppier with the makeup and my messed up hair was on point.

The Joker Gallery of Photos

Taking The Joker to the Cons

My Heath Ledger Joker’s first appearance in public was at Spooky Empire Tampa 2019.  I was pleasantly surprised at how well he was received and had a lot of fun pretending to be Gotham’s most notorious villain and trickster.  So many fun interactions and pics were taken that day including new acquaintances made.

I met and took pics with a Scarecrow cosplayer, a Catwoman cosplayer, two Wonderwomen, a Harley Quinn and some other Jokesters just to name a few.

Many people stopped to take my picture and I was later intrigued to find myself on Creative Loafing’s website out of Tampa as a top photo of the day from Spooky Empire.

Because the makeup took an hour to put on and I live in Orlando, I coordinated two events that day in Tampa as The Joker and that first event was a Photoshoot with a talented photographer and new friend that happens to live close to the convention center where Spooky was being held.  Thanks again Travis for meeting with me early that day to have some great shots done of The Joker in mob threads and bank heist threads.

This convention has quickly become my favorite Con other than DragonCon. I’ve had the best experiences going the last two years and it’s local.  I took the interrogation Joker with me and was thrilled because there were a lot of Harleys and other fun photo-ops to be had there.

I also got to combine a professional shoot with one of my favorite photographers BriLan Imagery as you’ve scene above and many of my other cosplay shoots.

I was already giddy as Christmas is my favorite time of year and the Con was in December and many cosplayers themed their cosplays for Christmas time.  The hotel Orlando Center World Marriott was decked out wonderfully as a yule tide get away.  So many people–so many great costumes!

This was such a fun cosplay to do and will still be an ongoing project because there will be two more Dark Knight Joker versions coming soon.  The nurse disguise Joker and the ceremonial cop version without makeup.  Stay tuned here or my Instagram and Facebook for any updates.

Because the makeup is quite involved I made sure I took a lot of pictures to try and avoid forgetting a pose or missing out on a great photo opportunity.

I even made a couple quick videos of me as the Joker from the film:

I have a good friend Brian Vavra who is really good at photoshop and I asked him to take one of my pictures from Spooky Empire and put a different background on it and he did an awesome job putting me in a nighttime back ally Gotham scene…check it out before and after: 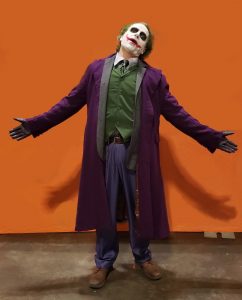 The Joker background before change; edit by Brian Vavra 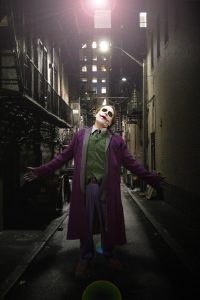 Thanks for taking a gander at how I managed to bring The Joker by Heath Ledger into my Cosplay obsession world.  I had an amazing time with him and I’m still bringing more aspects of his character to life.  MegaCon Orlando 2020 is when I’ll be revealing the nurse disguise version of him to the public for the first time.  I learned so much with this project.  I really wanted to do him and did not include him as part of a shared photoshoot with a Featured Cospayer that usually determines whom I cosplay next.  I was able to completely focus on bringing The Joker to life. 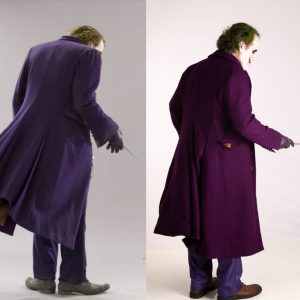 Side by side Dark Knight Joker

2 thoughts on “Becoming The Joker from The Dark Knight”