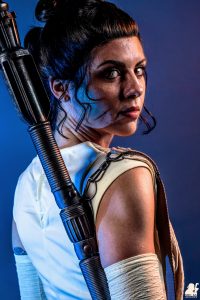 “SOLD”  I’m buying into the mania that is 3D printed anything.  That is if  you can’t find, afford or make for yourself for any Cosplay or prop needs.  Only, however, if the file exists to print (which most likely it does or it can be digitized).  When the printers first came onto the scene, I was reluctant only because I believed that it removes me as an artist from the equation to make and figure out my own fabrication.

Now accuracy is important to me and I still have to assemble, finish and paint the prop so my artistry and fabrication skills are still required.  Also, the amount of time saved with 3D printed props are the main selling point for me as I no longer have the luxury of taking as long as I need to make a prop or costume accessory.

This post is NOT a tutorial, but a review and a guide with my 3D printed experience.  All my pieces were printed by my good friend Damaris who I’ve wrote about and referred to a lot on this website and was my first interview on my Featured Cosplayers page.  The three props that I had printed were from Star Wars: The Force Awakens and were used with my shared photoshoot with Kat Caraway of Her Majesty Kat‘s Rey Cosplay to my Han Solo Cosplay.  These props are Anakin Skywalker’s lightsaber, the NN-14 blaster Han gives to Rey, and Rey’s quarterstaff. 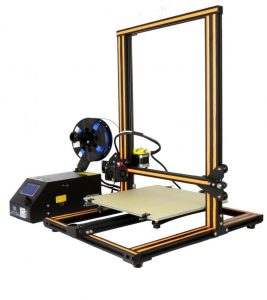 A quick definition according to Wikipedia is: The 3D printing process builds a three-dimensional object from a computer-aided design (CAD) model, usually by successively adding material layer by layer, which is why it is also called additive manufacturing, unlike conventional machining, casting and forging processes, where material is removed from a stock item (subtractive manufacturing) or poured into a mold and shaped by means of dies, presses and hammers.
The term “3D printing” covers a variety of processes in which material is joined or solidified under computer control to create a three-dimensional object, with material being added together (such as liquid molecules or powder grains being fused together), typically layer by layer.

The printer Damaris has is the CR-10 printer which has the capacity of 12″X12″X15″ and was solely used for all the parts printed for my projects.

She confessed to me that it took over four months to get the hang of it and tweak all the settings just right for the best results.  Much reading and several YouTube tutorials went into learning how to use and perfect the process.

All of my props that were printed required multiple small pieces each to be assembled and one of the great features of the 3D printer is being able to print more than one piece at a time.  If it all fits on the 12″X12″ platform, it can be added to the program and printed alongside each other.  See below…

It’s important to give credit to thingiverse.com for all the files used to print the specific star wars props.  I’ll give links to the free files in each section of each prop.

So let’s begin by breaking down (or building up) each of the props made using the 3D printing process: 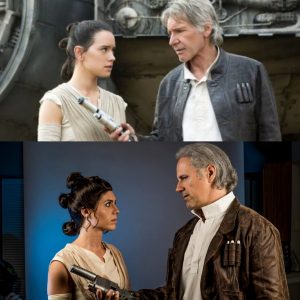 The NN-14 blaster was made solely for me to recreate the perfect collaborated photo of Han giving Rey the gun in front of the Millennium Falcon in The Force Awakens.  A total of eleven pieces were printed to be able to make the prop weapon.  Once I got the pieces from Damaris there was minor clean up, but they were immediately ready for assembly.  Super glue was my choice of adhesion and the brand Gorilla glue using the gel formula for the super glue is what I used.  I did have to clamp some of the larger pieces that came together for maximum strength when the glue dried as the larger pieces separate wanted to pull away a little when put together.  I used one screw down the shaft of the barrel to the main body to make sure the barrel could never come apart.

Once all the pieces were assembled together, I was pleasantly surprised how incredibly lightweight the prop was.  I would then be adding real screws and screw heads as aesthetics to all the pre-marked holes printed out ahead of time for the blasters multiple screw appearance shown on the prop.  These screws are purely visual and weren’t necessary for the assembly’s integrity.  I managed to obtain several star shaped holes on the heads of some screws to give the gun a futuristic and accurate feel.

One undesirable characteristic of a finished 3D part, straight off the printer, is the appearance and feel of striations or lines representing each layer of built up cooled plastic filament as the printer injects the substrate for the makeup of the piece.  Kind of like rings inside a tree trunk, you can count how many rings or layers it took to print the part.  This is undesirable because as strong as the filament is (which is a good thing) sanding the piece smooth becomes a real challenge.  Now, because I planned on having a heavily weathered or aged finished prop, I wasn’t as worried trying to sand it perfectly smooth other than the barrel.

The file used for the NN-14 Blaster can be found here: thingiverse.com.  Don’t be a jerk and mass produce these from this file for money.  Make your own file first. 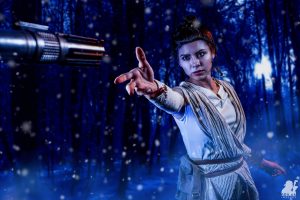 The lightsaber chose you; photo and edit by BriLan Imagery

Anakin’s lightsaber makes it’s way all the way to Episode 7 and beyond as it becomes Rey’s Jedi weapon, so naturally I had to include it in the photoshoot.

Whoever made this file did a great job with adding inserts and location attachment nubs to aid in the assembly process as there were many pieces to this prop.  It was important that I pre-fit the pieces before immediately starting to glue because minor clean up and sanding needed to be done to the attachment areas to bring about a better snug fit.

The file also would only include the instruction for one of each part and there needed to be a multiple of the same part for the bottom grip.  Therefore, I had to inform Damaris to print five more of that particular part.

I was again surprised just how light this prop felt when finished.   3D printed piece when it has girth to it is not solid, but has a “honeycomb” or scaffold inner guts that helps keep the shape yet maintain a hollow feel.

I mentioned earlier how sanding 3D printed parts is very difficult as the filament when hardened is incredibly tough.  This prop had to be as smooth as can be as to give a stainless steel appearance to the lightsaber as it is portrayed on screen.  Damaris knew of a product that is available specifically for 3D parts that can be brushed on in thin layers to help eliminate the striations from the printing process.  This product is called XTC-3D.

The file for Anakin’s lightsaber is here: thingiverse.com.

This prop was the first and most obvious element I wanted to have for the photoshoot.  It was actually what started it all as Kat wanted me to make her one for her Rey she was working on even before our planned idea behind the shoot, so she commissioned me to make it for her.  This prop is hers now, but I kept the other two for my own collection.

Much of the same steps were taken producing this piece as it took making the blaster and lightsaber.  What’s impressive about this file is the one inch opening already incorporated  with each part so as to be able to slip the pieces on a pre-existing 1″ PVC pipe obtained to help make up the staff.  I also had a few repeat parts that had to be printed twice and sometimes even three times for some of the pieces.  I did little sanding as the striations actually added a machined look to the parts.

Much of this prop was NOT a result of 3D printing. For instance the pipe the pieces were slid onto, the strap for carrying,  and the cloth and faux leather wrappings as a grip.  The paint job gave this staff a weathered rusty look as scene in many pics.  I really enjoyed making this weapon the most and would like to make another one for my own collection.

The file for Rey’s staff can be found here: thingiverse.com.

I can’t say enough about how thankful I am for my friend Damaris and her willingness to make these parts for me.  She has become quite good at the printing process and has even started her own company called CATBOX: 3D PRINTING AND PROPS.  Check out her Etsy shop!