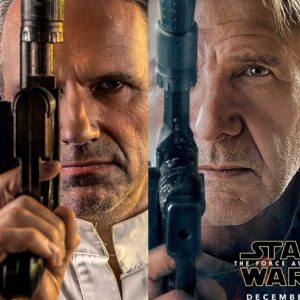 Side by side Han Solo Cosplay vs character

The birth of the idea of becoming Han Solo from Star Wars The Force Awakens is a funny story that came out of my traditional shared photoshoot with a new featured cosplayer for my page here.  She is Kat Caraway of Her Majesty Kat and she specializes in Disney princesses and characters.  There was no way I was going to pass as a young handsome prince to go along side of her beautiful young princess so the next best thing was for me to represent my “older” age and after seeing her test Rey cosplay–Han Solo was perfect!  The bonus for me here is that I love Star Wars, particularly Han Solo’s character and I got to bring a favorite fandom into my cosplay portfolio.

I Always Start With the Props 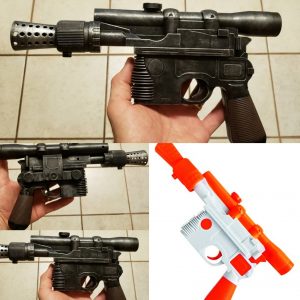 Taking a cheap Rubies toy and converting it into a realistic looking prop.

Whenever I start a new cosplay, I almost always begin by making or obtaining and altering any props or weapons the character may call for. Since my specialty is with prop making, it’s the one thing I have the most control over and can begin feeling motivated to continue finishing the cosplay with confidence.

For Han it was his iconic DL-44 blaster that I found a cheap toy of and was able to change and repaint to make it look real.  I first got the idea from my dear friend Damaris of Mystiques World of Cosplay (my first interview 🙂 ) who showed me just how to do it.  The steps were to sand off the lettering, copyright, and made in china.  Then drill out the simulated holes on the flash hider and then paint.  See pic to the left.  The only regret of using this particular toy weapon is that the scope is attached to the body of the gun whereas the actual movie prop the scope is held off of the main part of the blaster slightly to the right with brackets.  Rubies had to make an easily moldable and producible piece for mass production.

On the Hunt for the Right Threads

Looking at a lot of good leather coats on line specifically for the Episode 7 Han was discouraging as the price was way, Way, WAY out of my price range.  I ended up scoring a great deal on eBay for a replica (faux leather) which was exciting because the order came with the shirt, pants and holster as well.

After receiving the order, it was clear I had a lot of work to do to make some of the accessories work for an accurate cosplay.  For instance the belt with holster wasn’t usable at all as it was just too thin and off color.  I ended up ordering a separate holster and belt off Amazon which I was extremely happy with upon receiving.

Back to the first order with the rest of the of the items, the shirt was perfect and the pants were acceptable even though I felt they looked a little too shiny.  The coat, however, wad the right detailing, but the color was way off as it was too light and I would end up dyeing it darker using two 4 oz bottles of leather dye. 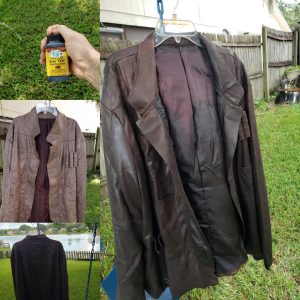 After days and days of drying I sealed both the inside and out of the jacket with Krylon crystal clear satin acrylic coating because one thing I’ve learned is that even though the leather dye is dry to the touch–once my sweaty self begins to perspire the dye would reactivate and get onto my pristine white shirt.  A sweet advantage to using the heavy clear spray paint was it gave the jacket a stiff characteristic as the coat came from the manufacturer as thin and flimsy, so now I have an authentic feeling heavy jacket.

Now the hunt for the correct boots became even more expensive than the jacket proved to be, so off I went for cheaper options that wasn’t quite screen accurate but photographed well for the shoot.  The kind of boots I ordered were the exact kind of boots I used for my T-1000 terminator except Han’s were to be brown.  I found the brown boots from Funtasma on Amazon.  They are very comfortable, too, as I remembered walking around a whole day at MegaCon Orlando as The Terminator.  What makes these boots inaccurate is there is a crease in the front of the boot even though they’re the right height and there is an exposed zipper on the inner side of the leg, which Han’s didn’t show any creases, lines or zippers on his from the movie.  I am happy with these boots as I can foresee possibly using these boots for another cosplay down the road.

What to do About the Hair 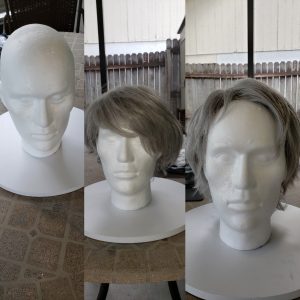 Restyling a wig for Han Solo The Force Awakens Cosplay

The most difficult part about this Cosplay was what I had to do to achieve gray hair for an older appearance and to match Harrison Ford‘s look as Han Solo.  I never wore a wig before, so I was going to give it a try.  This is the wig I got off of Amazon.  It seemed as if it could work after restyling it and so I began the process of doing something I never done before.  I bought a Styrofoam head and pinned the wig in place.  I had reference pics in front of me of Han Solo from the movie and began combing, cutting and spraying hair spray to help hold its shape.  I was rather happy with the end look, but when I went to put it on, it was a little too small and I felt like a goofball in it (sorry no pics of the shaggy me).  After failing miserably at this attempt, I was forced to do hair coloring options.

This is where having friends in the Cosplay community comes in quite handy as I had to get help on how, and what products to use to change my hair color temporarily for a single day.  I got advise from both Khal of Atlantis (on his coloring his beard for his Geralt Witcher cosplay) and from Turbo Time Cosplay (from his side burns for his Lord Baelish GOT cosplay).  I ended up combining the two ideas together to achieve the look.  Pepe, on his beard, used a white hair spray coloring and added baby powder.  Justin used a bees wax natural hair coloring by Mofajang, which worked wonderfully and was easy to work with.

The first step was to straighten my curly, wavy hair as Harrison Ford has straight hair.  For the coloring, I started with the wax, then sprayed the white hair spray a little here and there where it looked weak and shook baby powder throughout to catch any underneath, near the scalp, hair missed in the process.  I confess with my frizzy thick curly hair it really didn’t appear natural, but looked gray and photographed well.

After the success of a terrific photoshoot I inquired about what it would take to have my Han Solo cosplay become Rebel Legion approved for trooping locally.  It turns out that I didn’t get a single thing right or accurate enough for becoming a member.  I completely understand the high standards needed to be a legion member and, perhaps, with some serious tweaking I can make it work.