The plan to become Robert Patrick’s advanced Terminator from Terminator 2: Judgement Day came from my desire to do a shared photoshoot with a Featured Cosplayer I was working on here on my website. The cosplayer Justin Grubb of Turbo Time Cosplay does a terrific Terminator and the T-1000 was the perfect character to go along side his. I wanted to think of a cosplay that wouldn’t show my age, or show my hair that I’m trying to grow out, and of course one that I would enjoy doing as well. So the motorcycle cop version of the T-1000 with the helmet and mirrored shades was a brilliant and fun one to do. [Interesting fact: my father-in-law’s name is Robert Patrick].

I was also learning an important aspect of Cosplay that Justin does so well, and that’s the research and sourcing part of building a character to portray. I had watched the movie again and again, googled images and read several forums on this very character to find everything I needed. There was some building and crafting I had to do which is my specialty which I’ll be showing you throughout this article. Thanks to Justin of Turbo Time Cosplay for all his help and for just being and all around “Cool Cat” to hang with.

Acquiring and Modifying the Helmet

The first thing that I immediately started to research and try to acquire was the motorcycle helmet that really makes or breaks the appearance of the character. And after several attempts at possibly finding the exact one for sale I ended up purchasing a motorcycle helmet that I was going to have to seriously modify. The driving force to this decision (and most decisions for this cosplay) was the budget and trying to keep it as low as possible. So here is where you can purchase a good helmet cheap to modify.

The primary modification is of course the paint job to give it the screen accurate Los Angeles Highway Patrol uniform approved appearance. I work for a sign company so I had access to the good sign and automotive paint and tools to make it happen. I began by removing the visor and then sanded the existing finish with 220 grit sandpaper for the new paint to have “tooth” to adhere good. I masked off the inside of the helmet and painted the whole outer shell with two coats of white. After about 2 hours for the paint to dry and cure, I taped off the top of the helmet and prepared then painted two coats of black to the bottom half. I then removed the tape on the top covering the white and sprayed a satin clear coat over the whole helmet. I chose satin for photography reasons and not a high gloss sheen as you see with most helmets.

One serious obstacle with the helmet was trying to acquire a police helmet badge to make it official. It wasn’t long until I gave up the search, so I used my resources from work again and had one printed out of vinyl from a high resolution photo I found online.

See gallery below of the WIP for the helmet:

To move the progress along I was always on the hunt to find and order pieces to the costume that were ready to wear and finished upon receiving like:

These were all ready to go except I had to modify the rifle to look like an MPK-5 submachine gun that the T-1000 is seen using a lot as the motorcycle cop. See pics below as you’ll see I had to cut the barrel, eliminate the stock and add a longer banana clip mag that I cut out of 3/4″ black sintra PVC board:

This was simple and fun as they were all parts from a surplus electronics store and I was again imploring my new found technique of printing on vinyl to achieve an impossible item in two dimensional fashion and succeeding.  I also took the belt clip off of an old large tape measure and applied it to the back middle of the finished prop for functional belt attachment.  See pics below.

This was the best part of the whole job, other than wearing the finished costume at a Con, was the making of the Bullet wounds that are so prevalent throughout the film as the T-1000 gets shot.

My process was the same process I almost always do something with a specific shape and that’s sculpting what I need out of clay, making a silicone mold and then casting it out of a desired plastic.  Having a mold means I can make however many bullet wounds I desire.  I ended up with three different sizes and made about three of each size.

What sold these pieces the most as being incredibly effective in presentation was the paint I used to make them look metal.  I used a chrome spray paint from an aerosol can by Dupli-color.

When casting these pieces out of a liquid substance in the mold, right before the material would harden, I dropped a large zinc plated washer that would be a permanent part of the back surface of the bullet hole.  This was so I had an iron surface that a good strong earth magnet could be attracted to as that was how I was to attach them to the patrol jacket.  I therefore, had as many options for bullet placement as I wanted.

What makes the character authentic is the uniform and having him be a believable police officer.  All these parts of the jacket (including the patches), pants and boots were all purchases I made separately:

The only thing I had to do was to put all the patches on the jacket shoulders and I used hot glue instead of sewing which worked really well with the texture of the jacket for maximum adhesion.

Another important characteristic of the T-1000 terminator is his ability to take any shape, which includes turning any part of his body into a weapon, so I wanted to repeat the left arm spike he makes to stab a truck driver who was in the wrong place at the wrong time.

I thankfully, of course, used my resources made available to me from my place of work at Vital Signs of Orlando, Inc.  We had some reflective, mirrored plastic material left over from another job and I had a file made to have 4 pieces cut from the CNC router table to then be glued together and make a four sided spike.  See pics below of the process:

Ready to Have Fun 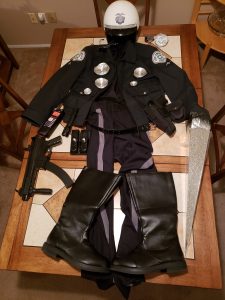 After putting it all together I was ready to test fit and schedule a photoshoot with Turbo Time Cosplay and photographer BriLan Imagery.  It took me a total of three months from the time I decided to do this cosplay to when we had our photoshoot to incorporate into the article I published on Justin.  I always seemed to be waiting for something to arrive and I spent a lot of time on eBay, not just for the items I ordered, but to sell some of my nuggets from the past to be able to afford everything I needed.  It was a never ending cycle it seemed and I still haven’t received my LAPD Police badge from China which is still stuck in customs.  I ended up borrowing Justin’s from his Jack Slater Last Action Hero Cosplay for our photoshoot. 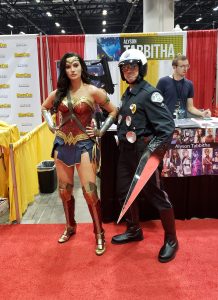 I was pleasantly surprised on how well my motorcycle cop terminator was received by all those who attended MegaCon on the Saturday (the busiest day) at the Orange County Convention Center.  Maybe it’s because I was the only one, but I think it is a rare cosplay and the memory of the T-1000 is seared in many peoples minds as it was a revolutionary film technique at the time and still holds up today.  I was stopped everywhere I went and kept hearing “T-1000…can I get a picture with you?”  I, of course, happily obliged and even got some pictures together with my camera phone with some of my favorite Cosplayers.  It’s a tradition of mine to get a picture with the Sweet and Talented Alyson Tabbitha whenever she makes a Guest appearance at a local convention.

One draw back to this costume is the heat generated by wearing a coat, helmet and knee high boots (which happens to be a common problem with about any cosplay).  Walking around all day with tons of other bodies close by can be an exhausting experience dressed up in a full patrol uniform.  It also didn’t help wearing sunglasses indoors as my vision became somewhat hindered.  The sacrifices we make for the love of the craft.