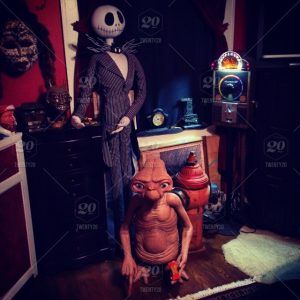 Welcome to my second installment of “My Top Ten Favorites…” where I discuss my top ten favorite movie props.  This was tough for me to compile as I love props and there were so many I left out to get to only ten.  I had to come up with some guidelines to keep the list short like “no helmets” since I’ll probably do a list of favorite movie costumes and helmets are a main part of costuming.  Also, as much as I love lightsabers from Star Wars, the actual prop is the handle and visual effects are what make the lightsaber work on screen, so no props that need extra help on film.  I pretty much went with what I think looks really cool to me and works well for the purpose in the particular movie. 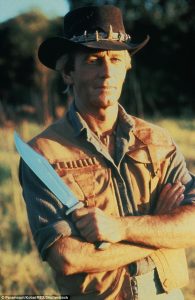 “That’s not a knife. This is a knife.” One of my favorite movie quotes where Dundee was talking about his famous knife that he always carries with him. He was being approached by a gang threatening him with a tiny switch blade knife when he spoke this line.

“The Dundee knife was created by an Australian gunsmith named John Bowring. He was approached by the studio that produced Crocodile Dundee film and asked to make an original knife for the Dundee character. Bowring agreed and produced the famous Dundee knife.”  (Survival Knife Mary)

DeLorean Time Machine from Back to the Future Trilogy 1985-1990

Yes, a whole car made my favorite prop list.  It probably helped that the DeLorean itself is one of my favorite cars anyway.  But by adding all the “bells and whistles” as a time machine catapults this car as a prop icon I think everyone will love.  The inside of the car with the “flux capacitor” and digital time display is an important memorable detail as well. 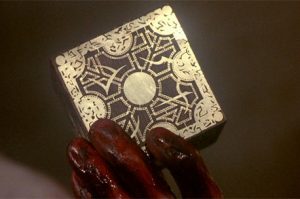 The Hellraiser puzzle box is simple, but can also take on a complex shape when activated opening a gateway for Pinhead and the Cenobites to enter our world.  I love the design and overall look to the cube and still aspire to having one of these in my prop collection one day. 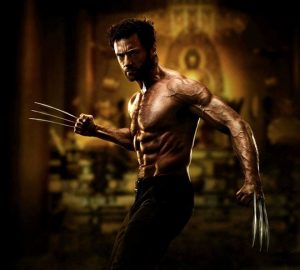 A spoiler about Wolverine, perhaps, if I do a list of favorite comic book characters is that he would be #1.  Seeing his claws designed well as a workable esthetic prop on film is exciting for me.  It’s a simple design that I’ve seen used in cosplay a lot but looks real and very cool as the Wolverine’s signature weapon. 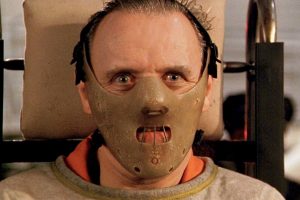 Another simple design of a prop, but makes a huge statement on film because of the character (and acting performance) that wields the power of it’s use.  Hannibal “the cannibal” Lecter can’t bite anything but his own tongue wearing this.  What sells this mask the most is seeing the whole shot of him wearing the classic straight jacket for an insane person strapped to a dolly, as well, as he’s being transferred.

“Who you gonna call…?”  Such a cool concept piece especially as a whole with the gun and trap that is the perfect design for what it’s supposed to do on film.  And there’s four of them, too!  I loved the Ghostbusters and my favorite parts of the films is when the Ghostbusters show up trying to look tough and important in their jumpsuits and technical gear.  I’d feel important too if I were wearing it all. 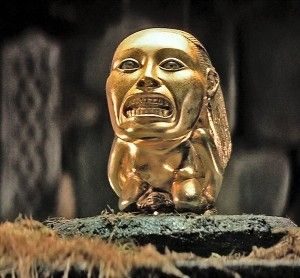 We get an introduction to exactly how the character of Indiana Jones is going to be like through the entire franchise of Archeology films starring Harrison Ford with this opening scene–and the lengths he’ll go for a priceless artifact, particularly this first one, is incredibly exciting.  I’ll never forget watching this film on the big screen as an eleven year old kid imagining being an archaeologist myself one day.  Of course that didn’t happen, but my love for art, particularly 3D art, is portrayed with my love for prop making. 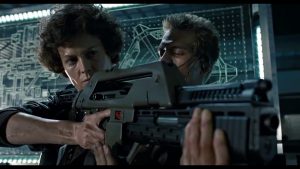 I love this movie and I love this gun!  Everything about this rifle is so cool…from the shape, the sound it makes on film, the badass marines who use it, it’s killing force against the aliens, and the digital countdown of ammunition.  I especially love the scene when Ripley (Sigourney Weaver) cocks it with one arm and launches grenades into alien eggs when approaching the Queen alien’s lair.  A close companion to the rifle is the scanner used alongside the rifle to detect movement when locating how close the aliens are.  “Game over, man!” 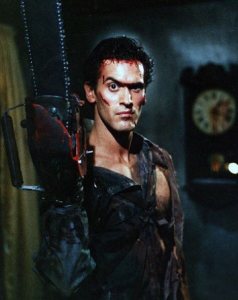 “Groovy!”  How ironic that the very chainsaw used to cut off his hand becomes the extension to where his hand used to be.  I hope that’s not too much of a spoiler because the events of this movie and the way Bruce Campbell plays the role of Ash is something NOT to be missed!  The chainsaw is an iconic symbol for the Evil Dead series and rightfully so.  The scene in the shed where Ash constructs his defense with the chainsaw and sawed off shotgun is a filming and editing masterpiece. 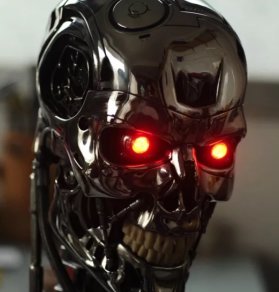 This is definitely a must have in my collection!  So brilliant of a design and concept, and so awesome and cool to look at!  I can totally see and imagine flesh overtop of the chrome to get to the face of Arnold Schwarzenagger as the cybernetic assassin.  I list reasons why this is one of my favorite movies in my blog post on My Top Ten Favorite Movies, but I left out this one reason that the film houses my favorite prop.  “I’ll be back.”

And I’ll be back with more top ten favorites soon on makeup and costuming in film.  Let me know what you think so far with my favorites and comment here what some of your favorite movie props are.

Thanks again for hanging out and keep a look out for more content here with cosplay, prop and costume making.