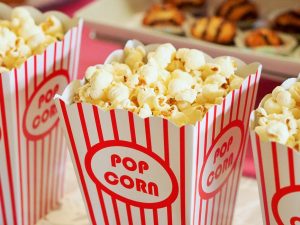 So I thought it would be cool to do a series of my top ten favorites like my top ten favorite movie props, or my top ten favorite comic book characters, etc…  I’ll start with my top ten favorite movies, which most of these are directly responsible in influencing my passion for makeup, cosplay and prop making.  I know many of you will agree that these films are quite good if you’ve seen them, but I’ll also be revealing my age since several of these films impacted me as a young lad finding my place in the world.  The countdown will start at #10 and work it’s way down to my #1 favorite movie of all time.  One criteria that I went by, when choosing these films, is that I could watch these movies over and over again and never get tired of seeing them repeatedly, which I’ve already done time and time again. 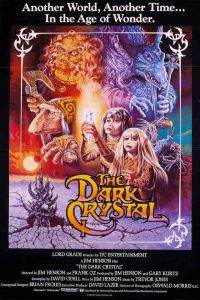 I could no longer watch the muppets the same after seeing what I believe to be Jim Henson’s greatest masterpiece.  Not only was the puppetry and special effects incredible, but the story line was well written and went along smoothly with the film’s intent.  The gelflings in the movie were almost human or lifelike enough for me, as a kid watching, creeped me out so much that it hypnotized me and I couldn’t look away.  Today when I watch it again and again, the skeksis are clearly the best part of the movie for me.  The sculpting and work that went behind them must have been intense for such an amazing design.  I am still in awe every time I watch it. 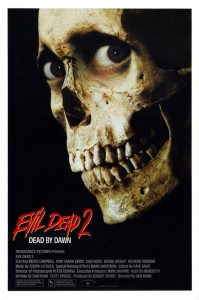 There are several reasons this movie easily made the cut into my top ten and I’ll get to them in a second, but perhaps what stands out the most as the best part of this movie is simple…Bruce Campbell!  This was my introduction to the genius of Bruce’s acting and humor and even though he was in the first one, Sam must have held him back then, no holds bar on this performance of Ash for Evil Dead 2.  What a terrific treat.  Sam Raimi’s vision on technical film style and camera angles gets my next kudos for this film.  Several new and innovative shots were introduced here and we still see them today thanks to Sam Raimi.  In a time when I was obsessed with horror films I remember after watching this one that I had to get into the industry somehow and I left for Florida soon after to become a makeup artist. 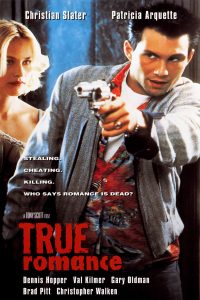 Acting is king in this film and the cast is unmatched…just look at them all!  But perhaps the greatest performance, in my opinion, was Gary Oldman’s as Alabama’s pimp.  In fact I remember making the decision that Gary Oldman would be (and still is) my favorite actor after watching True Romance.  This film has everything from humor, elite acting performances, action, and best of all an amazing script.  Here is where I found out about the one and only screenwriter Quentin Tarantino.  Most of you know him from his work on Pulp Fiction, Reservoir Dogs, and Kill Bill.  The man is brilliant and interesting dialogue is his specialty. 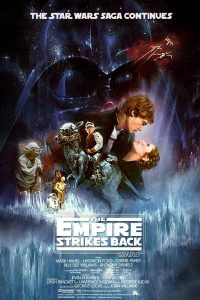 Star Wars The Empire Strikes Back 1980; directed by Irvin Kershner

There are several Star Wars films that could have easily made the cut since I am a big Star Wars fan, but this is clearly my favorite and can represent the Star Wars saga for me.  I picked The Empire Strikes Back mainly because of my childhood attachment to it.  One of the first biggest Star Wars toys I had, other than the figures, was the T-47 snowspeeder from Hoth.  I had countless hours playing the Hoth battle scene out with my friend who happen to have the large AT-AT introduced in the film as well.  I also started collecting trading cards and I remember trying to find all the cards and stickers in the set.  I’ve watched this movie the most out of all of them and I can say that even today I get excited and find new gems within the movie to admire.  The reveal of Darth Vader’s and Luke Skywalker’s true identities propelled the plot exponentially. 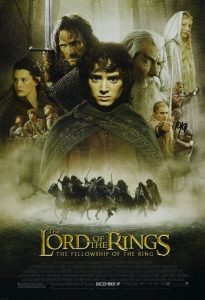 The Lord of the Rings: The Fellowship of the Ring 2001; directed by Peter Jackson

Where do I begin with this one?  So many reasons why I love it, I can’t just name a few, but I will try for this entry.  Peter Jackson‘s commitment to keep the film as accurate as possible to J.R.R. Tolkien‘s masterful work from The Lord of the Rings trilogy of books helped him recreate the story with visual perfection.  Since the FOTR (fellowship of the ring) was the first one to see in Peter Jackson’s trilogy it would have the most impact in introducing the enormous undertaking of the project.  The Lord of the Rings: The Two Towers and The Lord of the Rings: The Return of the King were just as beautiful as the first.  In fact these three movies were filmed at the same time over a period of three years!  I love watching the making of these films on the DVD’s extras menu almost as much as the films.  Props and SPFX makeup get me giddy here thanks to WETA Workshop.  New Zealand’s beautiful diverse landscape was the perfect choice to film the many different lands in Middle Earth, so set design propels the film even further.  If you’re a fantasy nerd like me and love stories and tales of medieval times J.R.R. Tolkien’s books are brilliant.  But even if you haven’t read the books these films are the ultimate eye candy and will give you the greatest emotional roller coaster ride a movie can offer. 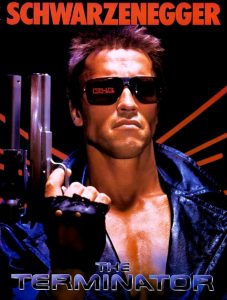 The Terminator 1984; directed by James Cameron

The script to this film is absolutely brilliant, which is why it was able to be so successful and launch several more well made films in the franchise.  When I tell folks why I love this movie I tell them about the story of the first time I saw it.  To keep it short, the highlight of the story is that I had absolutely no idea what it was going to be about because I never seen a trailer for it.  This is why, even today, I try to avoid too much pre-hype of a film and also try to avoid long trailers that give the film away.  Watching this film for the first time and seeing two (what appears to be) hostiles from the future, at the beginning, pursuing an unsuspecting damsel is captivating.  I’m sure most of you have seen this, but if not, I’ll stop there so I don’t spoil it, since not knowing about it wooed me.  I’ll be doing a list soon of my top ten favorite movie props and if you read this, you’ll get a hint of one of my favorite props which is the T-800 endoskull. 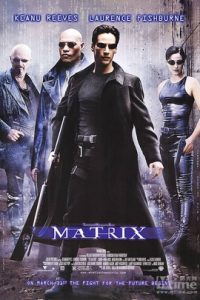 Kung Fu, computers, leather and shades…doesn’t get any better than that…OH, except when you add a mind blowing story to go along with them.  The Matrix has an intense, brain-buster script similar to The Terminator, but, in my opinion, slightly better which is why it falls just one more closer to my favorite film of all time.  Visual effects reins supreme as well for technological reasons.  New techniques in cinematography were invented with multiple cameras and angles and editing that forever immortalized scenes in our heads…if you’ve scene it, you know what I’m talking about.  Pure magic! 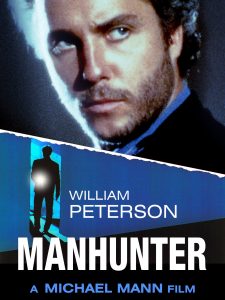 Michael Mann is a master at creating the perfect mood and emotion using the soundtrack and composition of any scene.  I loved this movie precisely because of it.  I was a huge fan of Miami Vice TV show growing up and I was thrilled to see Michael Mann was involved with this film.  Here is where we get our first glimpse of Dr. Hannibal Lecter portrayed by Brian Cox.  Even though we remember Anthony Hopkins immediately for this role, Brian, who is just as much a high caliber actor as Anthony, played Hannibal first.  This movie is based off the book Red Dragon by Thomas Harris.  I don’t really know how convincing I can be and do the film justice, but it’s one you just have to trust me on and seeing is believing.  A true Masterpiece! 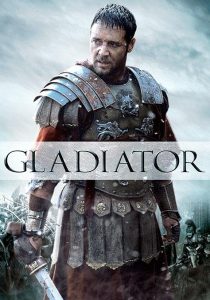 Best “come back kid” revenge story ever!  This movie is sensational!  It has everything from being visually stunning, a captivating story, superior set and even beautiful costuming.  The main character Maximus portrayed by Russell Crowe goes through an amazing journey at every stage of power to near death to being hated and then being loved, which keeps you emotionally attached throughout the entire film.  Each action sequence is set up to be more anticipated and exponentially more exciting than the previous one.  An absolute must see again and again!

…and the #1 favorite movie of mine is… 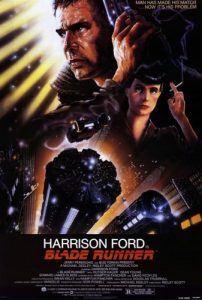 So my top two favorite movies are directed by Ridley Scott.  Coincidence?…I think not.  The man is a genius.  So, if I were to have a list of favorite directors, he’d be number one also.  When I came up with the list and I was thinking of movies to consider in the top ten, Blade Runner and it’s position as number #1 was the only one I knew of right away. The movie is king of all of them and I have talked to a lot of people that agree with me that Blade Runner is their favorite movie also. (At least folks my age).  Even though I’m a visual guy, my favorite part of this movie is the soundtrack by Vangelis.  The soundtrack is a fluid merger of every stunning scene that solidifies the film emotionally.  I still get chills and hold back awesomeness tears every time I watch it.  Do Androids Dream of Electric Sheep by Philip K. Dick is the novel that the film is based off of.  This film has an elite cast including Harrison Ford, Rutger Hauer, Edward James Olmos, Sean Young, and Daryl Hannah.  The story takes place in the future (well…the future from 1982) and what is so alluring about it is that it seems like a future I believe could really happen to some extent.

I hope I haven’t given away any spoilers if you haven’t seen any of these and I want to believe I hyped these movies up enough that you want to make an effort to view them for yourself or even see again if they’re already part of your library.

This was a fun list to make and there were several movies I considered to be in the top ten, but didn’t make the cut.  A quick list of these, and not in any particular order are:

…just to name a few…

Thanks for takin’ a gander at my opinion in films and please leave a comment on what may be some of your own favorites and/or if you agree with any of these films as a possible contender as your own favorites.

One thought on “My Top Ten Favorite Movies”