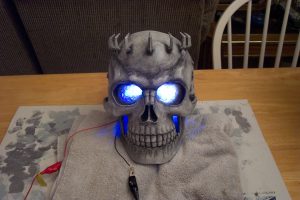 LEDs for lighting the eyes on Skull Knight.

I love how cosplaying is getting more and more popular.  There hasn’t been a better time to be a fan of the comic/sci-fi/anime world then now.  I remember a time before the term “cosplay” was coined and one would have been considered a nerd or geek for going to a Star Trek convention in full uniform.  Now it’s all celebrated and very mainstream which could have some disadvantages, but the fun and excitement will always supersede.

So with the great competition–there’s no better way to succeed than to “Light It Up!”  If you’re costume calls for electronics–DO IT!  It’s somewhat simple and incredibly effective and will definitely turn heads.  We’ll also talk about how lights and electrical effects turns up the WOW factor for your collectible props display as well.

I’d like to start off featuring my favorite ensemble in my collection which is my Battlestar Galactica flight suit and Viper helmet, which both happen to have cool lighting effects.  The suit was made by Geoff Gay of Midwick Armory. He does an amazing job by using the same material the BSG production used on the show which makes his suits screen accurate.  The electronics for the suit is the O2 (oxygen sensor) on the left lower arm sleeve of the suit.  It’s a circuit board with 5 LEDs that can change color from green to red.  These circuit boards are made and provided to Geoff by Dana Gassar of Anovos Productions. They have a 3 stage pressure switch run by a 9V battery.

The Viper helmet, which is made by me, is a fiberglass reproduction from a mold and is painted with automotive paint and has a custom PETG plastic vacuum formed lens.  The helmet features two separate lighting systems, one inside the helmet and the two on the lower outside.  Both systems are turned on by the same switch, but have their own power source.  The two LEDs on the outside are run by a 9V battery and the inside forehead lights are run by it’s own 9V battery.  The internal forehead lights were purchased at Autozone.  Auto parts stores like Autozone and PEP Boys are a great source for all kinds of lights and electronics.

Next is the full armor Skull Knight costume I made which has a lighting effect with LEDs in the eyes.  I managed to strategically place the lighting so not to hinder the vision of the cosplayer inside.  Here I am at DragonCon 2011 where you can see the glowing effect in the eyes. This is a daylight shot, so you can imagine if the lights in the Marriot (where this pic was taken) were dimmed. 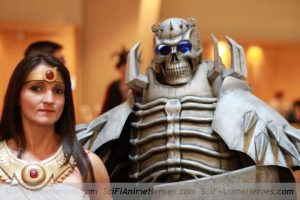 Lighting doesn’t have to be the sole enhancer to your outfit.  Sound effects is a good  way to surprise onlookers to get their attention.  I am always in awe when someone in  stormtrooper armor adds the voice box to their helmet, so when they talk it sounds just like the movie.

Before we get to lighting up props, there is one more quick electrical thing I’ve done before, which I highly recommend when wearing a helmet for an extended period of time, is putting in little fans or a cooling system.  It may not be noticeable for the crowds, but it will keep you marching on. 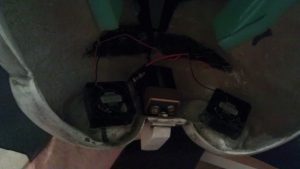 Here is where we venture off into the world of props to give them a boost with lights in your collection.  The props I made that will be highlighted here are my 1:1 scale Cylon bust display with it’s sweeping red eye effect, 1:1 scale Guts Berserker armor helmet and decorative base from Berserk manga, and the 1:1 scale bust of Skull Knight from Berserk manga as well.

The Battlestar Galactica Cylon’s LED circuit board was made and provided to me by George from Timeslip Creations.  It’s run by 2 AA batteries and I had to convert it to run the switch down onto the base rather than the board.  I just used alligator clips connected to wire to run down the inside of the neck to a toggle switch at the back of the round base.

I put window tinting on a sheet of white copy paper and cut out the shape and stuck it to the back of the plexi glass lens to dissipate the lights so you don’t see the harsh definition of each LED.  It created a smooth sweeping effect.  My first attempt of the eye sweep before asking George to make the boards for me was I bought the Custom Dynamics Night Rider scanner lights.  It was an okay start and it looked cool, but it was way to fast and it looked like the Cylon was on steroids. 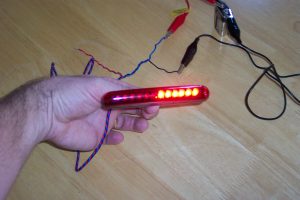 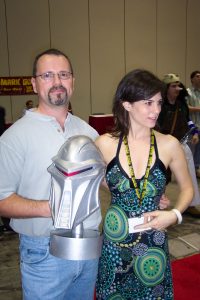 The Berserk prop entry of the Berserker Armor and Skull Knight bust was a carefully well thought out collaboration with a friend I’ve come to know through these projects.  His name is Derek and I talked about him a little on the Home page.  He is the moderator of the Berserk merchandise at skullnight.net forum.  We turned the project into multiple runs (about 30) for fans of the manga to purchase.  Derek was the driving force and designer of these pieces including what to do with the lighting.

For Guts Berserker helmet I used the same style of lights I used on the inside of the viper helmet for the “Z” shaped eyes.  For the base I found a nice little gem of a small circuit board with red LEDs that had seven different action settings. 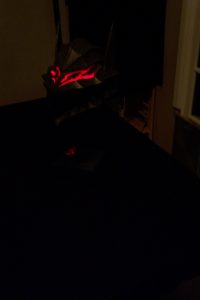 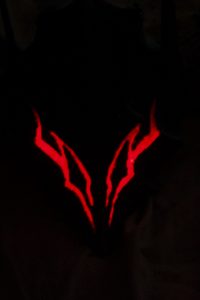 Skull Knight was a little more complicated with the small space I had to work with inside the skull and I had to cover any gaps or voids in the helmet skull so the light would only penetrate through the eyes.  I just hot glued black jersey material from behind, inside the head where the light shined through.  The switch for Skull Knight to turn on the lights is located right behind the inside back of the chin so I didn’t have to run any wires down to the base.  All the electronics are localized in the skull.

So if either you have an awe inspiring costuming impression or a prop room display that you and your guests want to hang out in all day it will be because of the extra effort you put in by adding lighting and electronics.  This can be a great tribute to the fandom culture by representing what you are mimicking with complete accuracy and detail.

Thanks for hanging out here for a little while and I intend on doing complete tutorials on hooking up LEDs to batteries, resistors and switches in the near future so keep a look out here for updates.

ENJOY planning your next adventure!